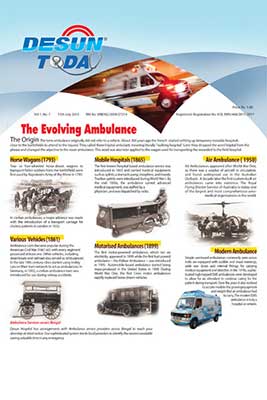 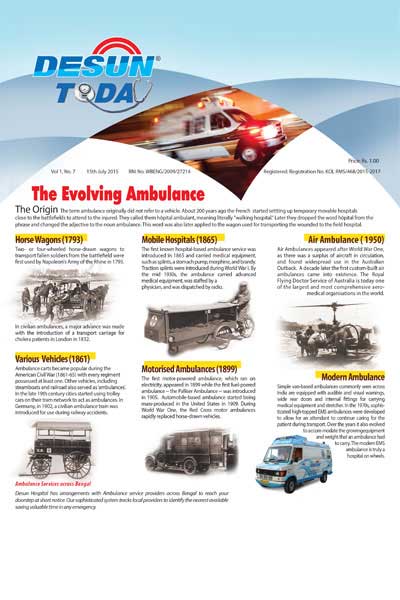 The Origin The term ambulance originally did not refer to a vehicle. About 200 years ago the French started settting up temporary movable hospitals close to the battlefields to attend to the injured. They called them hôpital ambulant, meaning literally "walking hospital." Later they dropped the word hôpital from the phrase and changed the adjective to the noun ambulance. This word was also later applied to the wagon used for transporting the wounded to the field hospital.

Two- or four-wheeled horse-drawn wagons to transport fallen soldiers from the battlefield were firstused by Napoleon's Army of the Rhine in 1793. In civilian ambulances, a major advance was made with the introduction of a transport carriage for cholera patients in London in 1832.

Ambulance carts became popular during the American Civil War (1861-65) with every regiment possessed at least one. Other vehicles, including steamboats and railroad also served as ‘ambulances’. In the late 19th century cities started using trolley cars on their tram network to act as ambulances. In Germany, in 1902, a civilian ambulance train was introduced for use during railway accidents.

The first motor-powered ambulance, which ran on electricity, appeared in 1899 while the first fuel-poered ambulance -- the Palliser Ambulance -- was introduced in 1905. Automobile-based ambulance started being mass-produced in the United States in 1909. During World War One, the Red Cross motor ambulances rapidly replaced horse-drawn vehicles.

Air Ambulances appeared after World War One, as there was a surplus of aircraft in circulation, and found widespread use in the Australian Outback. A decade later the first custom-built air ambulances came into existence. The Royal Flying Doctor Service of Australia is today one of the largest and most comprehensive aero-medical organisations in the world.

Simple van-based ambulances commonly seen across India are equipped with audible and visual warnings, wide rear doors and internal fittings for carrying medical equipment and stretcher. In the 1970s, sophisticated high-topped EMS ambulances were developed to allow for an attendant to continue caring for the patient during transport. Over the years it also evolved to accom modate the growing equipment and weight that an ambulance had to carry. The modern EMS ambulance is truly a hospital on wheels.

Desun Hospital has arrangements with Ambulance service providers across Bengal to reach your doorstep at short notice. Our sophisticated system tracks local providers to identify the nearest available saving valuable time in any emergency.