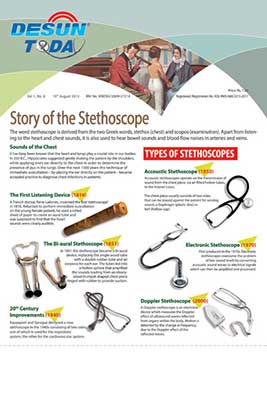 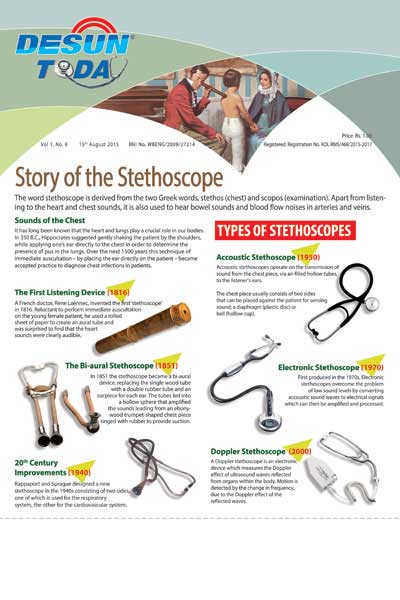 The word stethoscope is derived from the two Greek words, stethos (chest) and scopos (examination). Apart from listening to the heart and chest sounds, it is also used to hear bowel sounds and blood flow noises in arteries and veins.

Sounds of the Chest

It has long been known that the heart and lungs play a crucial role in our bodies. In 350 B.C., Hippocrates suggested gently shaking the patient by the shoulders, while applying one’s ear directly to the chest in order to determine the presence of pus in the lungs. Over the next 1500 years this technique of immediate auscultation – by placing the ear directly on the patient – became accepted practice to diagnose chest infections in patients.

A French doctor, Rene Laënnec, invented the first ‘stethoscope’in 1816. Reluctant to perform immediate auscultationon the young female patient, he used a rolledsheet of paper to create an aural tube andwas surprised to find that the heartsounds were clearly audible.

In 1851 the stethoscope became a bi-auraldevice, replacing the single wood tube with a double rubber tube and an earpiece for each ear. The tubes led intoa hollow sphere that amplified the sounds leading from an ebonywood trumpet-shaped chest piece ringed with rubber to provide suction.

Rappaport and Sprague designed a new stethoscope in the 1940s consisting of two sides, one of which is used for the respiratory system, the other for the cardiovascular system.

Accoustic stethoscopes operate on the transmission of sound from the chest piece, via air-filled hollow tubes, to the listener's ears.

The chest piece usually consists of two sides that can be placed against the patient for sensing sound; a diaphragm (plastic disc) or bell (hollow cup).

First produced in the 1970s, Electronicstethoscopes overcome the problem of low sound levels by converting accoustic sound waves to electrical signalswhich can then be amplified and processed.