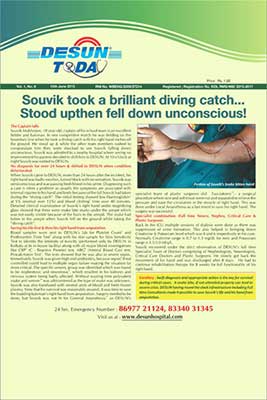 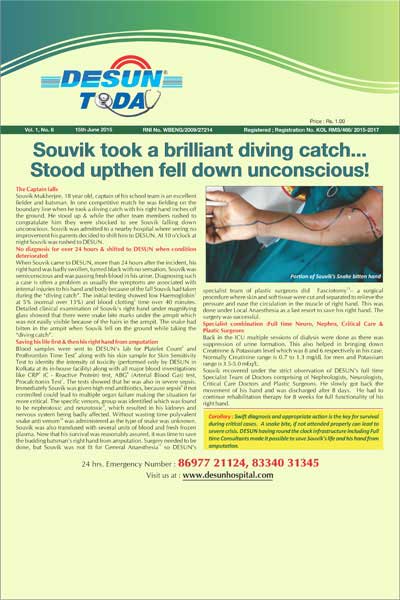 Souvik Mukherjee, 18 year old, captain of his school team is an excellent fielder and batsman. In one competitive match he was fielding on the boundary line when he took a diving catch with his right hand inches off the ground. He stood up & while the other team members rushed to congratulate him they were shocked to see Souvik falling down unconscious. Souvik was admitted to a nearby hospital where seeing no improvement his parents decided to shift him to DESUN. At 10 o'clock at night Souvik was rushed to DESUN.

When Souvik came to DESUN, more than 24 hours after the incident, his right hand was badly swollen, turned black with no sensation. Souvik was semiconscious and was passing fresh blood in his urine. Diagnosing such a case is often a problem as usually the symptoms are associated with internal injuries to his hand and body because of the fall Souvik had taken during the “diving catch”. The initial testing showed low Haemoglobin1 at 5% (normal over 13%) and blood clotting2 time over 40 minutes. Detailed clinical examination of Souvik's right hand under magnifying glass showed that there were snake bite marks under the armpit which was not easily visible because of the hairs in the armpit. The snake had bitten in the armpit when Souvik fell on the ground while taking the “diving catch”

Saving his life first & then his right hand from amputation

Blood samples were sent to DESUN's lab for Platelet Count3 and Prothrombin Time Test4 along with his skin sample for Skin Sensitivity Test to identity the intensity of toxicity (performed only by DESUN in Kolkata at its in-house facility) along with all major blood investigations like CRP5 (C - Reactive Protein) test, ABG6 (Arterial Blood Gas) test, Procalcitonin Test7. The tests showed that he was also in severe sepsis. Immediately Souvik was given high end antibiotics, because sepsis8 if not controlled could lead to multiple organ failure making the situation far more critical. The specific venom, group was identified which was found to be Nephrotoxic and Neurotoxic9, which resulted in his kidneys and nervous system being badly affected. Without wasting time polyvalent snake anti venom10 was administered as the type of snake was unknown. Souvik was also transfused with several units of blood and fresh frozen plasma. Now that his survival was reasonably assured, it was time to save the budding batsman's right hand from amputation. Surgery needed to be done, but Souvik was not fit for General Anaesthesia11 so DESUN's specialist team of plastic surgeons did Fasciotomy12– a surgical procedure where skin and soft tissue were cut and separated to relieve the pressure and ease the circulation in the muscle of right hand. This was done under Local Anaesthesia as a last resort to save his right hand. The surgery was successful.

Back in the ICU multiple sessions of dialysis were done as there was suppression of urine formation. This also helped in bringing down Creatinine & Potassium level which was 8 and 6 respectively in his case. Normally Creatinine range is 0.7 to 1.3 mg/dL for men and Potassium range is 3.5-5.0 mEq/L. Souvik recovered under the strict observation of DESUN's full time Specialist Team of Doctors comprising of Nephrologists, Neurologists, Critical Care Doctors and Plastic Surgeons. He slowly got back the movement of his hand and was discharged after 8 days. He had to continue rehabilitation therapy for 8 weeks for full functionality of his right hand.

Corollary : Swift diagnosis and appropriate action is the key for survival during critical cases. A snake bite, if not attended properly can lead to severe crisis. DESUN having round the clock infrastructure including Full Time Consultants made it possible to save Souvik's life and his hand from amputation.