Desun Today : August 2015 - A night of celebration that became a nightmare 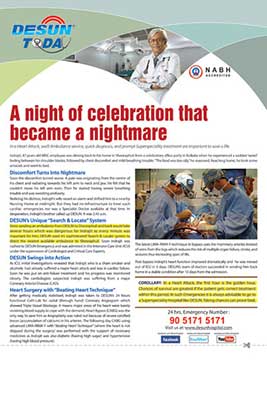 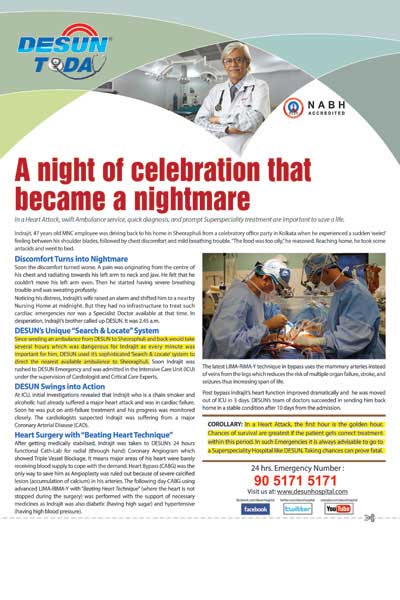 In a Heart Attack, swift Ambulance service, quick diagnosis, and prompt Superspeciality treatment are important to save a life.

Indrajit, 47 years old MNC employee was driving back to his home in Sheoraphuli from a celebratory office party in Kolkata when he experienced a sudden ‘weird’ feeling between his shoulder blades, followed by chest discomfort and mild breathing trouble. “The food was too oily,” he reasoned. Reaching home, he took some antacids and went to bed.

Soon the discomfort turned worse. A pain was originating from the centre of his chest and radiating towards his left arm to neck and jaw. He felt that he couldn’t move his left arm even. Then he started having severe breathing trouble and was sweating profusely.

Noticing his distress, Indrajit’s wife raised an alarm and shifted him to a nearby Nursing Home at midnight. But they had no infrastructure to treat such cardiac emergencies nor was a Specialist Doctor available at that time. In desperation, Indrajit’s brother called up DESUN. It was 2.45 a.m.

Since sending an ambulance from DESUN to Sheoraphuli and back would take several hours which was dangerous for Indrajit as every minute was important for him, DESUN used it’s sophisticated ‘Search & Locate’ system to direct the nearest available ambulance to Sheoraphuli. Soon Indrajit was rushed to DESUN Emergency and was admitted in the Intensive Care Unit (ICU) under the supervision of Cardiologist and Critical Care Experts.

At ICU, initial investigations revealed that Indrajit who is a chain smoker and alcoholic had already suffered a major heart attack and was in cardiac failure. Soon he was put on anti-failure treatment and his progress was monitored closely. The cardiologists suspected Indrajit was suffering from a major Coronary Arterial Disease (CAD).

After getting medically stabilised, Indrajit was taken to DESUN’s 24 hours functional Cath-Lab for radial (through hand) Coronary Angiogram which showed Triple Vessel Blockage. It means major areas of his heart were barely receiving blood supply to cope with the demand. Heart Bypass (CABG) was the only way to save him as Angioplasty was ruled out because of severe calcified lesion (accumulation of calcium) in his arteries. The following day CABG using advanced LIMA-RIMA-Y with “Beating Heart Technique” (where the heart is not stopped during the surgery) was performed with the support of necessary medicines as Indrajit was also diabetic (having high sugar) and hypertensive (having high blood pressure). - See more at: http://desunhospital.com/a-night-of-celebration-that-became-a-nightmare.php#sthash.WgOGHF4o.dpuf

The latest LIMA-RIMA-Y technique in bypass uses the mammary arteries instead of veins from the legs which reduces the risk of multiple organ failure, stroke, and seizures thus increasing span of life.

Post bypass Indrajit’s heart function improved dramatically and he was moved out of ICU in 3 days. DESUN’s team of doctors succeeded in sending him back home in a stable condition after 10 days from the admission.

COROLLARY: In a Heart Attack, the first hour is the golden hour. Chances of survival are greatest if the patient gets correct treatment within this period. In such Emergencies it is always advisable to go to a Superspeciality Hospital like DESUN. Taking chances can prove fatal.