Desun Today : July 2015 - He started walking towards the bathroom, staggered and fell 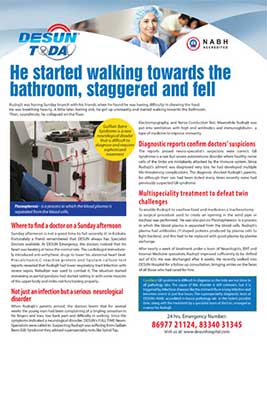 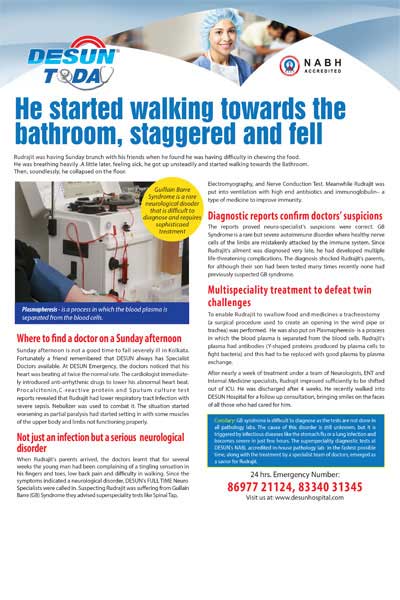 Rudrajit was having Sunday brunch with his friends when he found he was having difficulty in chewing the food. He was breathing heavily .A little later, feeling sick, he got up unsteadily and started walking towards the Bathroom. Then, soundlessly, he collapsed on the floor.

Where to find a doctor on a Sunday afternoon

Sunday afternoon is not a good time to fall severely ill in Kolkata. Fortunately a friend remembered that DESUN always has Specialist Doctors available. At DESUN Emergency, the doctors noticed that his heart was beating at twice the normal rate. The cardiologist immediately introduced anti-arrhythmic drugs to lower his abnormal heart beat. Procalcitonin,C-reactive protein and Sputum culture testreports revealed that Rudrajit had lower respiratory tract Infection with severe sepsis. Nebulizer was used to combat it. The situation started worsening as partial paralysis had started setting in with some muscles of the upper body and limbs not functioning properly.

Not just an infection but a serious neurological disorder

When Rudrajit's parents arrived, the doctors learnt that for several weeks the young man had been complaining of a tingling sensation in his fingers and toes, low back pain and difficulty in walking. Since the symptoms indicated a neurological disorder, DESUN's FULL TIME NeuroSpecialists were called in. Suspecting Rudrajit was suffering from Guillain Barre (GB) Syndrome they advised superspeciality tests like Spinal Tap,

Electromyography, and Nerve Conduction Test. Meanwhile Rudrajit was put into ventilation with high end antibiotics and immunoglobulin– a type of medicine to improve immunity.

The reports proved neuro-specialist's suspicions were correct. GB Syndrome is a rare but severe autoimmune disorder where healthy nerve cells of the limbs are mistakenly attacked by the immune system. Since Rudrajit's ailment was diagnosed very late, he had developed multiple life-threatening complications. The diagnosis shocked Rudrajit's parents, for although their son had been tested many times recently none had previously suspected GB syndrome.

To enable Rudrajit to swallow food and medicines a tracheostomy (a surgical procedure used to create an opening in the wind pipe or trachea) was performed. He was also put on Plasmapheresis- is a process in which the blood plasma is separated from the blood cells. Rudrajit's plasma had antibodies (Y-shaped proteins produced by plasma cells to fight bacteria) and this had to be replaced with good plasma by plasma exchange.

After nearly a week of treatment under a team of Neurologists, ENT and Internal Medicine specialists, Rudrajit improved sufficiently to be shifted out of ICU. He was discharged after 4 weeks. He recently walked into DESUN Hospital for a follow up consultation, bringing smiles on the faces of all those who had cared for him.

Corollary: GB syndrome is difficult to diagnose as the tests are not done in all pathology labs. The cause of this disorder is still unknown, but it is triggered by infectious diseases like the stomach flu or a lung infection and becomes severe in just few hours. The superspeciality diagnostic tests at DESUN's NABL accredited in-house pathology lab in the fastest possible time, along with the treatment by a specialist team of doctors, emerged as a savior for Rudrajit.

Guillain Barre Syndrome is a rare neurological disoder that is dif?cult to diagnose and requires sophisticaed treatment.

Plasmapheresis - is a process in which the blood plasma is separated from the blood cells.