Desun Update : March 2018 - THE FIRST STROKE IS A START. EVERYTHING AFTER THAT IS A RECOVERY 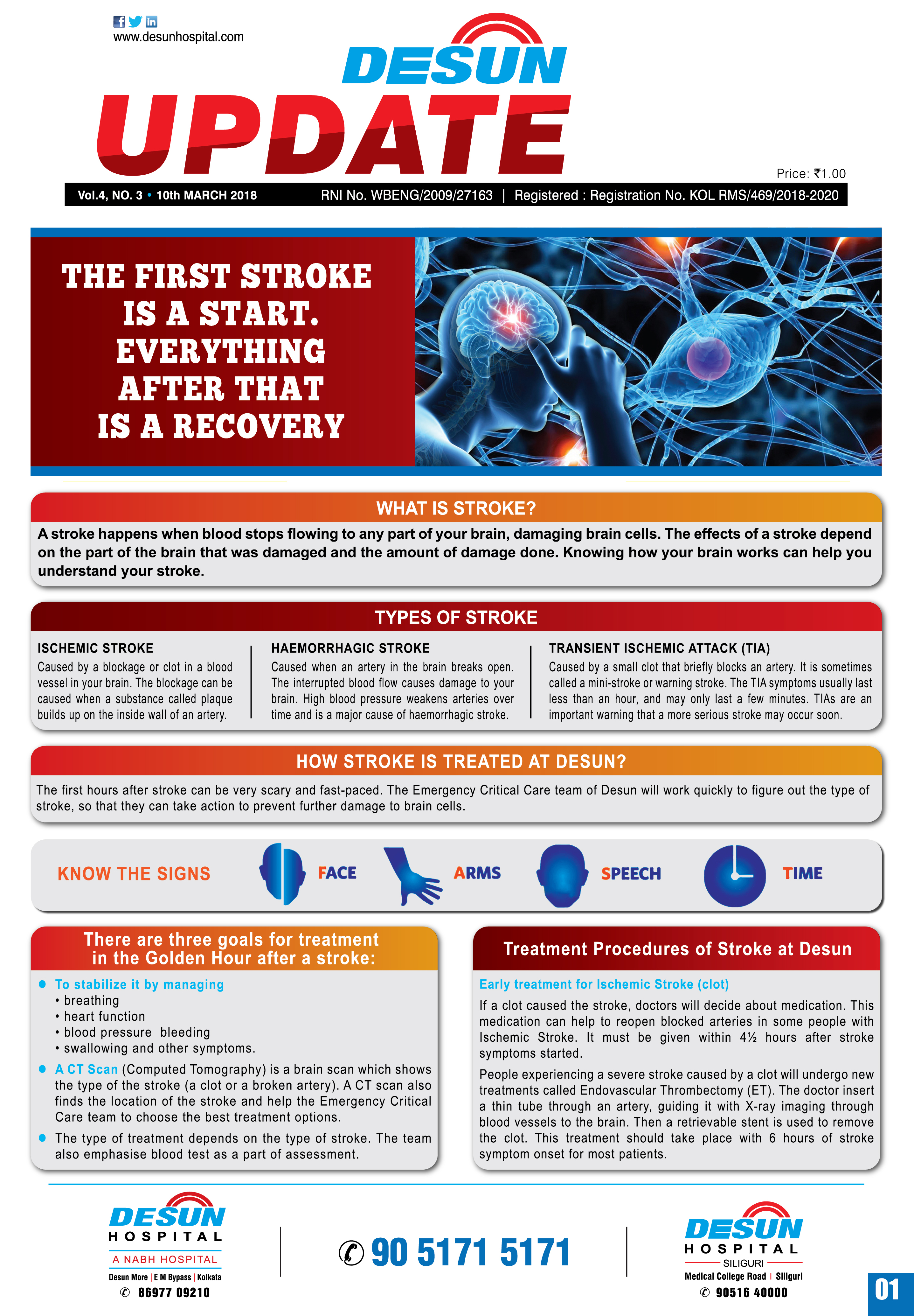 A stroke happens when blood stops flowing to any part of your brain, damaging brain cells. The effects of a stroke depend on the part of the brain that was damaged and the amount of damage done. Knowing how your brain works can help you understand your stroke.

Caused by a blockage or clot in a blood vessel in your brain. The blockage can be caused when a substance called plaque builds up on the inside wall of an artery.

Caused when an artery in the brain breaks open. The interrupted blood flow causes damage to your brain. High blood pressure weakens arteries over time and is a major cause of haemorrhagic stroke.

Caused by a small clot that briefly blocks an artery. It is sometimes called a mini-stroke or warning stroke. The TIA symptoms usually last less than an hour, and may only last a few minutes. TIAs are an important warning that a more serious stroke may occur soon.

Caused by a small clot that briefly blocks an artery. It is sometimes called a mini-stroke or warning stroke. The TIA symptoms usually last less than an hour, and may only last a few minutes. TIAs are an important warning that a more serious stroke may occur soon.

There are three goals for treatment in the Golden Hour after a stroke:

To stabilize it by managing

A CT Scan (Computed Tomography) is a brain scan which shows the type of the stroke (a clot or a broken artery). A CT scan also finds the location of the stroke and help the Emergency Critical Care team to choose the best treatment options.

The type of treatment depends on the type of stroke. The team also emphasise blood test as a part of assessment.

Treatment Procedures of Stroke at Desun

If a clot caused the stroke, doctors will decide about medication. This medication can help to reopen blocked arteries in some people with Ischemic Stroke. It must be given within 4½ hours after stroke symptoms started.

People experiencing a severe stroke caused by a clot will undergo new treatments called Endovascular Thrombectomy (ET). The doctor insert a thin tube through an artery, guiding it with X-ray imaging through blood vessels to the brain. Then a retrievable stent is used to remove the clot. This treatment should take place with 6 hours of stroke symptom onset for most patients.

Ambulance Pick-up even at midnight to all 156 Kolkata Pin Code areas for admission to DESUN Hospital Kolkata which helps in faster diagnosis and adequate treatment for complicated cases like stroke.

For areas outside Kolkata, Desun Hospital is in constant touch with over 300 Ambulances covering 13 Districts of South Bengal.

We guide you in locating Ambulance from your locality even at midnight, so that it takes half the time to reach DESUN. Also DESUN advises you the correct fare of Ambulances, so that you are not charged excessively.

Advanced Pathology : How is DESUN different from others?

For somebody admitted in ICU, time can make all the difference. In Kolkata only DESUN has advanced in-house pathology testing facilities where it takes only 3-4 hours to get test results! This helps in a speedy diagnosis, resulting in better treatment

Other hospitals have to send such tests to Delhi or Mumbai where it takes minimum 3-4 days for results to arrive, causing delays in accurate diagnosis and treatment.

You may be under the best team of consultant doctors but if they do not get pathology test reports on time, even they cannot help you!

DESUN is the Only Hospital Performing All Speciality Pathology Tests In-House!

DESUN has the largest pathology lab in Kolkata and performs over 1,000 Superspeciality pathology tests not done in any other hospital in Kolkata. Only at DESUN Hospital, all advanced pathology tests are done in-house, and samples are not sent to Delhi or Mumbai for testing.

Hence, you get faster test reports that help in early diagnosis and a speedier recovery.

Haemorrhagic stroke can be very serious and has a longer recovery time than ischemic stroke. At Desun due to availability of 24x7 skilled team of neurosurgeon will immediately determine whether a strokes case lead to medical management or surgical intervention.

The team of doctors at Desun will check often most scientifically to make sure symptoms are not getting worse within a quickest period of time. They will monitor the patient’s blood pressure and check for alertness, headache, weakness or paralysis, and other stroke symptoms for immediate identification and successful implication of proper treatment protocol.