Purnima Devi, a 69-year-old lady was brought to Desun Emergency from a nearby hospital. She was vomiting blood, complaining of stomach-ache and was losing consciousness at regular intervals with severe breathlessness, Hypertension & low saturation level.

IMMEDIATELY MEDICAL MANAGEMENT WAS STARTED DUE TO THE ADVANTAGES OF 24X7 AVAILABILITY OF DOCTOR, PARAMEDICS & ADVANCE PATHOLOGY TESTING

Within 2 hours i.e. by midnight the test results and clinical examinations by our panel of consultants revealed that she was anaemic, had high blood pressure, high blood sugar, hypothyroid and had also suffered a major CHF (Congestive Heart Failure) recently which was revealed in the Super specialty BNP test. As she was anaemic excessive bleeding could have been fatal for her.

In the ICU, when put under advanced monitoring, her essential parameters like blood pressure, pulse, oxygen saturation, etc. were extremely unstable.

Immediately he was put on Oxygen & Nebulisation Support due to low saturation level. Immediately 2 Units of blood transfusion was given due to severe anaemia. She was put on drugs, so that her bleeding could be controlled.

ACCURACY OF DIAGNOSIS REVEALED THE RAREST ABNORMALITY AT DESUN

Within 4 hours, endoscopy was done which showed that she was suffering from Dieulafoy's Lesion which is a rare clinical condition resulting in gastric haemorrhage (i.e. bleeding inside the food pipe). The usual procedure is to remove the lesion by open surgery. But this method, was not recommended by the Anaesthesist and also the Consultant of Internal Medicine as her condition was unstable, if surgery was advised immediately she would have not survived the surgery. On the other hand, if surgery was not done, then over a period of time she would have drained so much of blood that her survival also was only a matter of few hours. 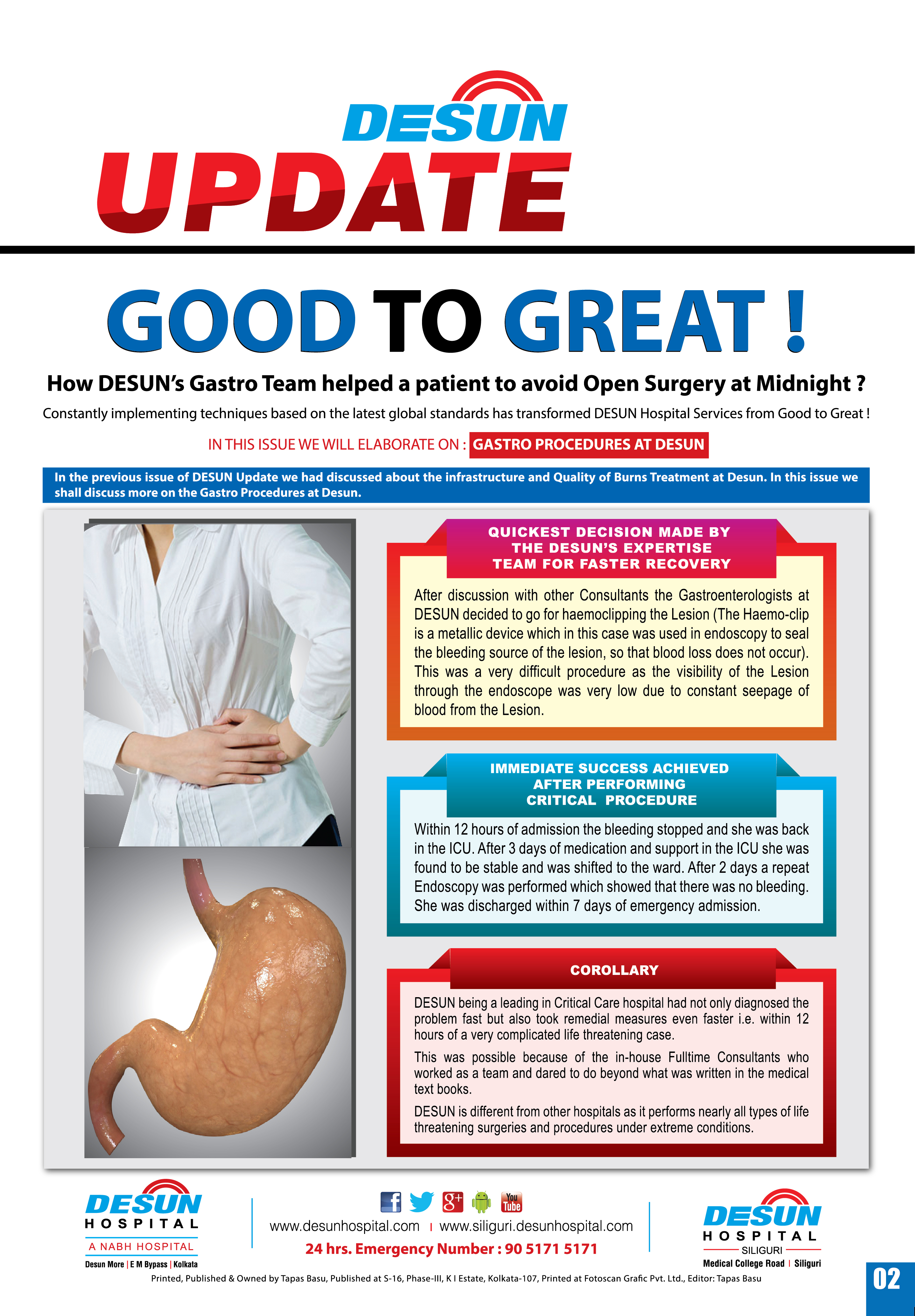 QUICKEST DECISION MADE BY THE DESUN’S EXPERTISETEAM FOR FASTER RECOVERY

After discussion with other Consultants the Gastroenterologists at DESUN decided to go for haemoclipping the Lesion (The Haemo-clip is a metallic device which in this case was used in endoscopy to seal the bleeding source of the lesion, so that blood loss does not occur). This was a very difficult procedure as the visibility of the Lesion through the endoscope was very low due to constant seepage of blood from the Lesion.

Within 12 hours of admission the bleeding stopped and she was back in the ICU. After 3 days of medication and support in the ICU she was found to be stable and was shifted to the ward. After 2 days a repeat Endoscopy was performed which showed that there was no bleeding. She was discharged within 7 days of emergency admission.

DESUN being a leading in Critical Care hospital had not only diagnosed the problem fast but also took remedial measures even faster i.e. within 12 hours of a very complicated life threatening case.

This was possible because of the in-house Fulltime Consultants who worked as a team and dared to do beyond what was written in the medical text books.

DESUN is different from other hospitals as it performs nearly all types of life threatening surgeries and procedures under extreme conditions.