Desun Update : February 2018 - SLEEP IS THE GOLDEN KNOT THAT TIES HEALTH AND BODY TOGETHER 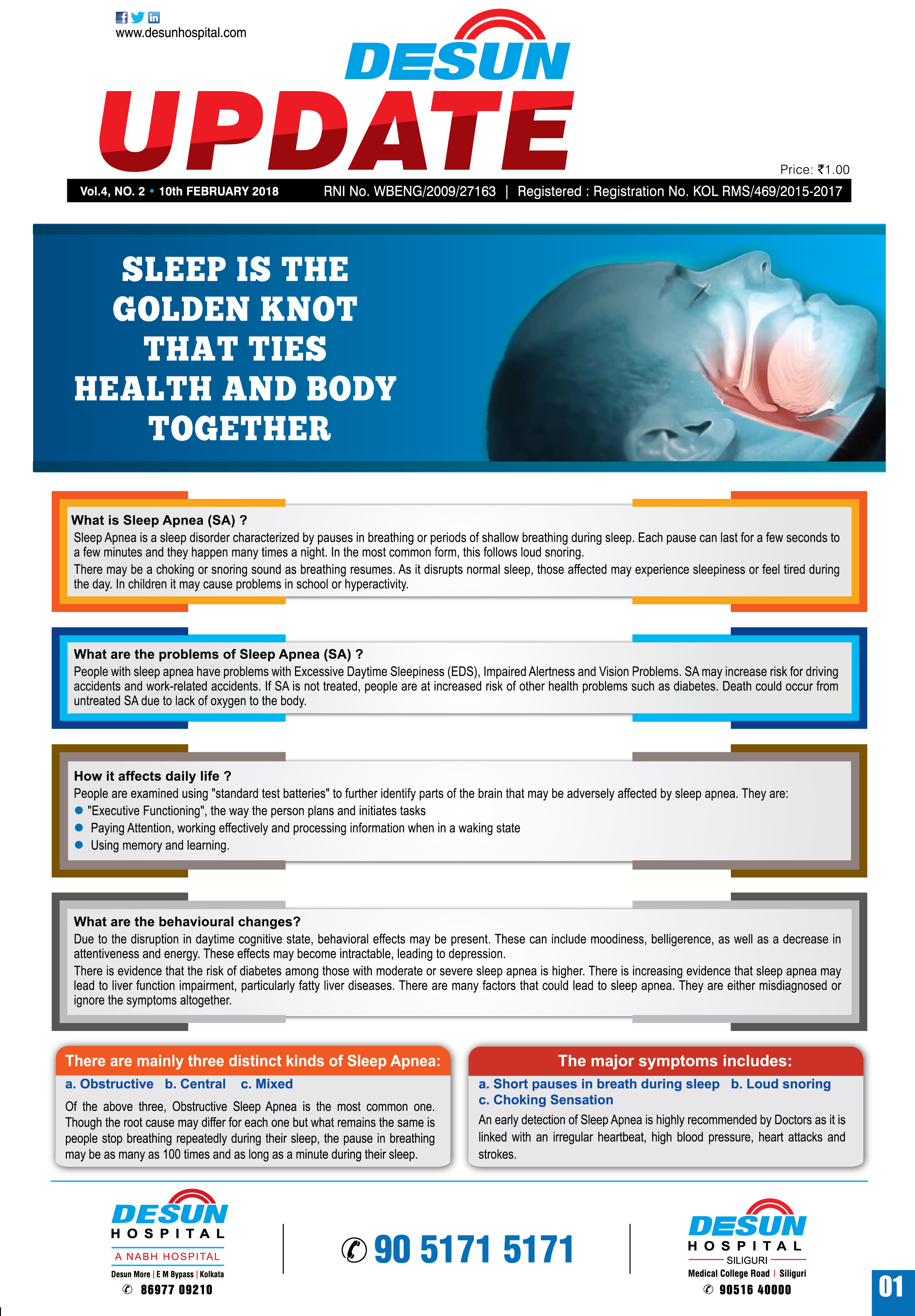 Sleep Apnea is a sleep disorder characterized by pauses in breathing or periods of shallow breathing during sleep. Each pause can last for a few seconds to a few minutes and they happen many times a night. In the most common form, this follows loud snoring.

There may be a choking or snoring sound as breathing resumes. As it disrupts normal sleep, those affected may experience sleepiness or feel tired during the day. In children it may cause problems in school or hyperactivity.

What are the problems of Sleep Apnea (SA) ?

People with sleep apnea have problems with Excessive Daytime Sleepiness (EDS), Impaired Alertness and Vision Problems. SA may increase risk for driving accidents and work-related accidents. If SA is not treated, people are at increased risk of other health problems such as diabetes. Death could occur from untreated SA due to lack of oxygen to the body.

How it affects daily life ?

People are examined using "standard test batteries" to further identify parts of the brain that may be adversely affected by sleep apnea. They are:

What are the behavioural changes?

Due to the disruption in daytime cognitive state, behavioral effects may be present. These can include moodiness, belligerence, as well as a decrease in attentiveness and energy. These effects may become intractable, leading to depression.

There is evidence that the risk of diabetes among those with moderate or severe sleep apnea is higher. There is increasing evidence that sleep apnea may lead to liver function impairment, particularly fatty liver diseases. There are many factors that could lead to sleep apnea. They are either misdiagnosed or ignore the symptoms altogether.

There are mainly three distinct kinds of Sleep Apnea:

Of the above three, Obstructive Sleep Apnea is the most common one. Though the root cause may differ for each one but what remains the same is people stop breathing repeatedly during their sleep, the pause in breathing may be as many as 100 times and as long as a minute during their sleep.

An early detection of Sleep Apnea is highly recommended by Doctors as it is linked with an irregular heartbeat, high blood pressure, heart attacks and strokes. 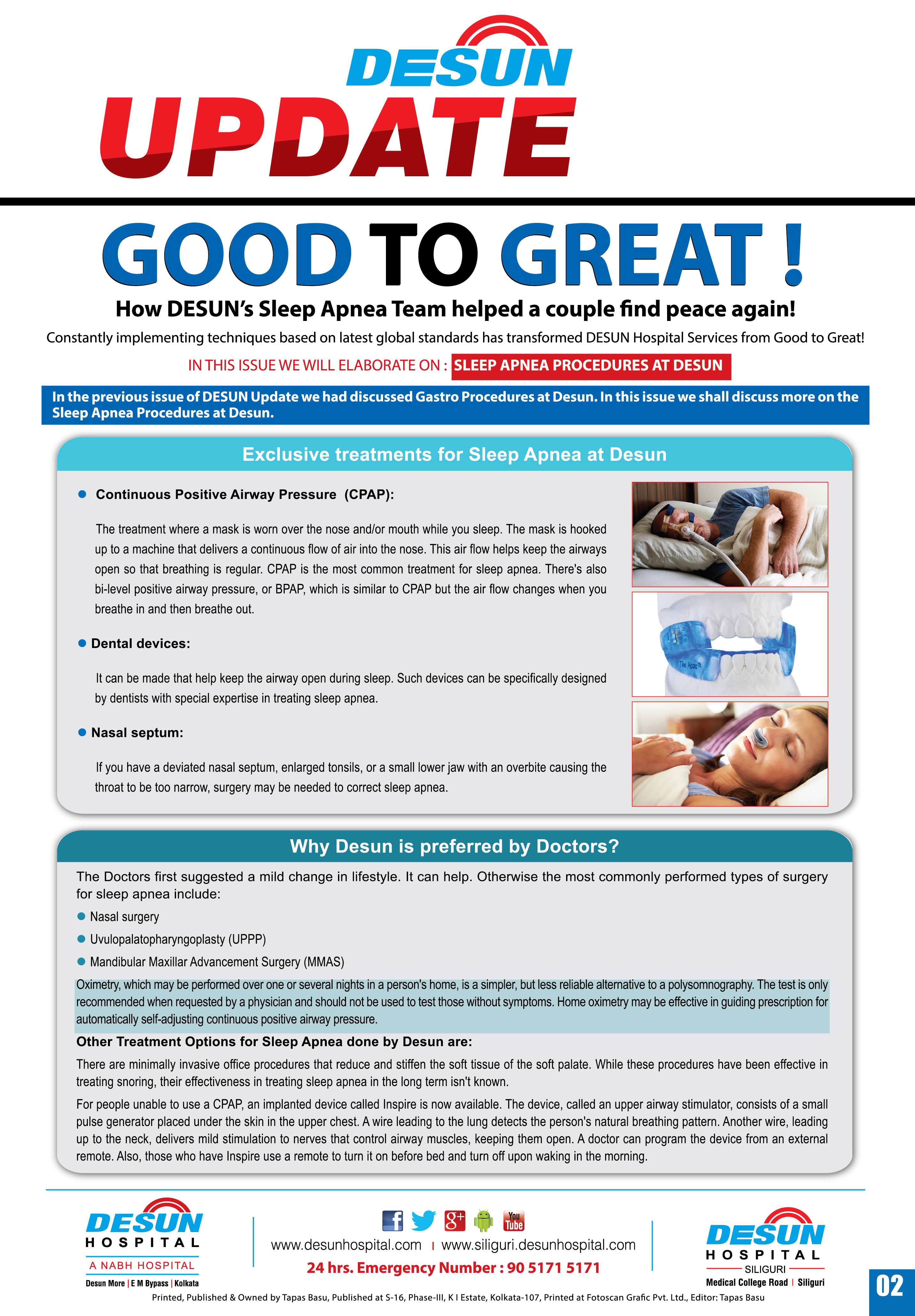 The treatment where a mask is worn over the nose and/or mouth while you sleep. The mask is hooked up to a machine that delivers a continuous flow of air into the nose. This air flow helps keep the airways open so that breathing is regular. CPAP is the most common treatment for sleep apnea. There's also bi-level positive airway pressure, or BPAP, which is similar to CPAP but the air flow changes when you breathe in and then breathe out.

It can be made that help keep the airway open during sleep. Such devices can be specifically designed by dentists with special expertise in treating sleep apnea.

If you have a deviated nasal septum, enlarged tonsils, or a small lower jaw with an overbite causing the throat to be too narrow, surgery may be needed to correct sleep apnea.

Why Desun is preferred by Doctors?

The Doctors first suggested a mild change in lifestyle. It can help. Otherwise the most commonly performed types of surgery for sleep apnea include:

Oximetry, which may be performed over one or several nights in a person's home, is a simpler, but less reliable alternative to a polysomnography. The test is only recommended when requested by a physician and should not be used to test those without symptoms. Home oximetry may be effective in guiding prescription for automatically self-adjusting continuous positive airway pressure.

Other Treatment Options for Sleep Apnea done by Desun are:

There are minimally invasive office procedures that reduce and stiffen the soft tissue of the soft palate. While these procedures have been effective in treating snoring, their effectiveness in treating sleep apnea in the long term isn't known.

For people unable to use a CPAP, an implanted device called Inspire is now available. The device, called an upper airway stimulator, consists of a small pulse generator placed under the skin in the upper chest. A wire leading to the lung detects the person's natural breathing pattern. Another wire, leading up to the neck, delivers mild stimulation to nerves that control airway muscles, keeping them open. A doctor can program the device from an external remote. Also, those who have Inspire use a remote to turn it on before bed and turn off upon waking in the morning.