Desun Update : July 2017 - ONE OF THE RAREST RTA SAVED BY THE EXPERTISE OF DESUN’S CRITICAL CARE TEAM 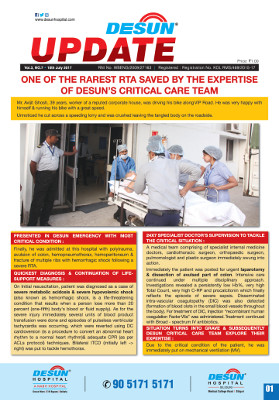 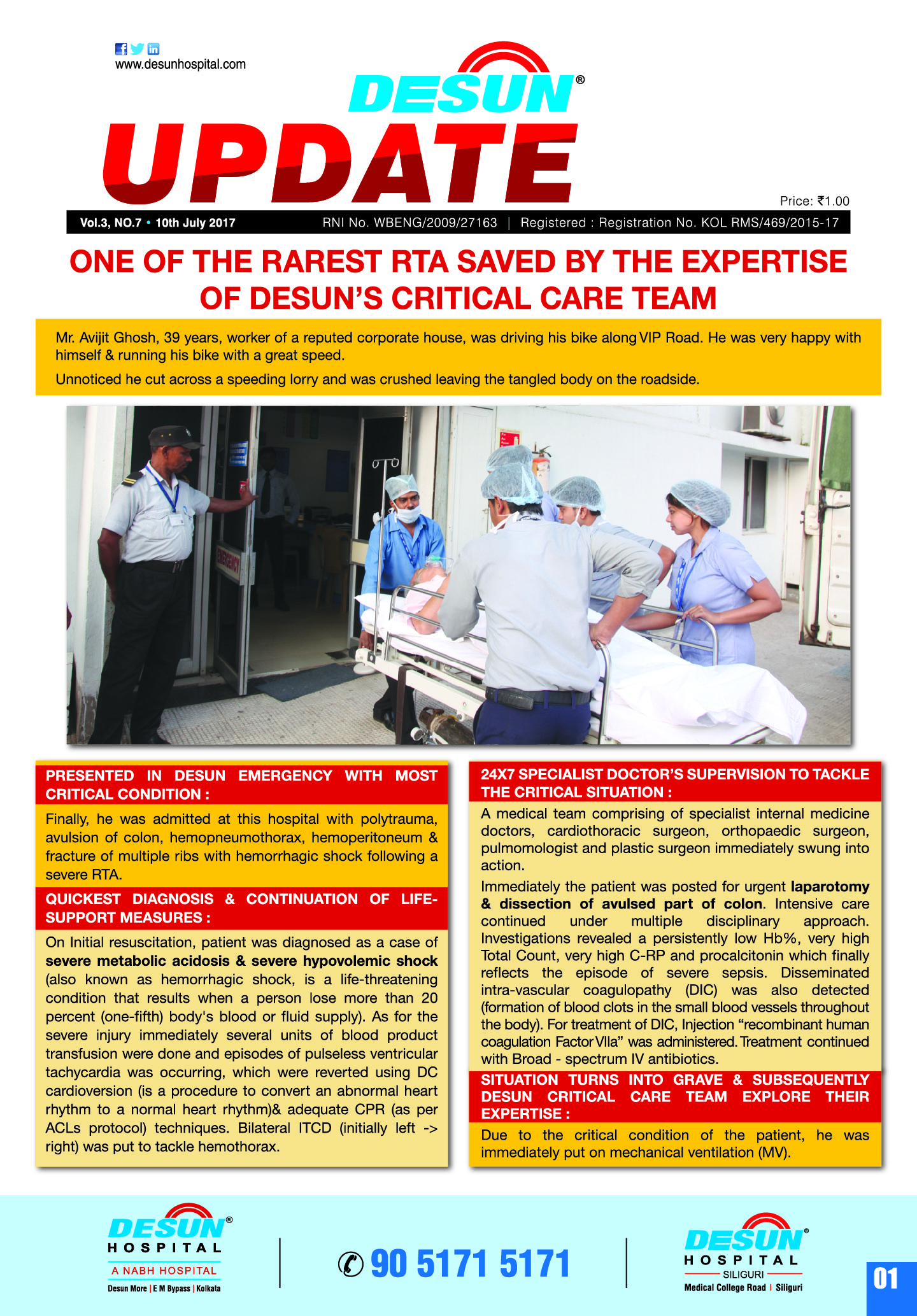 Mr. Avijit Ghosh, 39 years, worker of a reputed corporate house, was driving his bike along VIP Road. He was very happy with himself & running his bike with a great speed.

Unnoticed he cut across a speeding lorry and was crushed leaving the tangled body on the roadside.

PRESENTED IN DESUN EMERGENCY WITH MOST CRITICAL CONDITION :

Finally, he was admitted at this hospital with polytrauma, avulsion of colon, hemopneumothorax, hemoperitoneum & fracture of multiple ribs with hemorrhagic shock following a severe RTA.

On Initial resuscitation, patient was diagnosed as a case of severe metabolic acidosis & severe hypovolemic shock (also known as hemorrhagic shock, is a life-threatening condition that results when a person lose more than 20 percent (one-fifth) body's blood or fluid supply). As for the severe injury immediately several units of blood product transfusion were done and episodes of pulseless ventricular tachycardia was occurring, which were reverted using DC cardioversion (is a procedure to convert an abnormal heart rhythm to a normal heart rhythm)& adequate CPR (as per ACLs protocol) techniques. Bilateral ITCD (initially left -> right) was put to tackle hemothorax.

Due to the critical condition of the patient, he was immediately put on mechanical ventilation (MV). 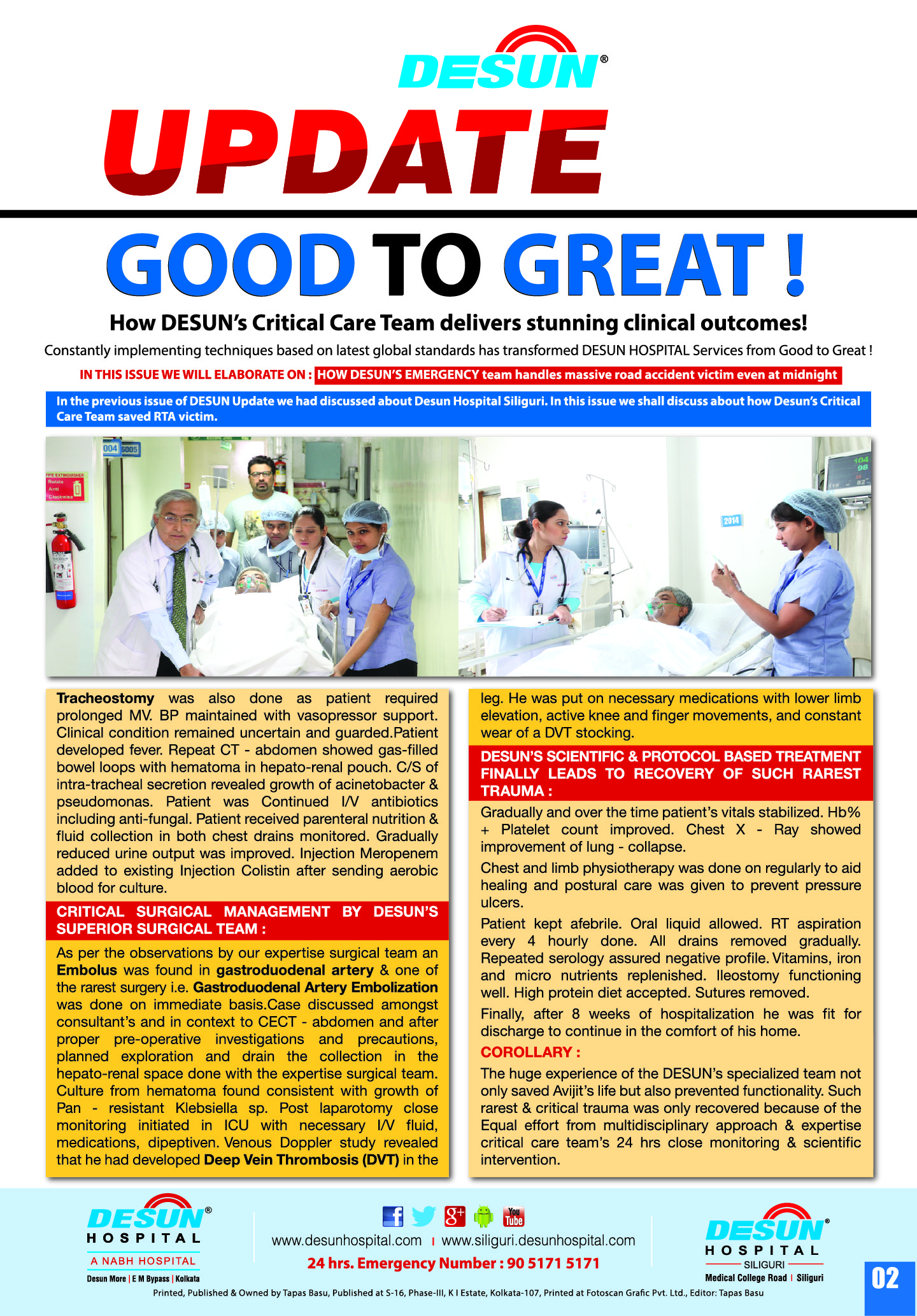 As per the observations by our expertise surgical team an Embolus was found in gastroduodenal artery & one of the rarest surgery i.e. Gastroduodenal Artery Embolization was done on immediate basis.Case discussed amongst consultant’s and in context to CECT - abdomen and after proper pre-operative investigations and precautions, planned exploration and drain the collection in the hepato-renal space done with the expertise surgical team. Culture from hematoma found consistent with growth of Pan - resistant Klebsiella sp. Post laparotomy close monitoring initiated in ICU with necessary I/V fluid, medications, dipeptiven. Venous Doppler study revealed that he had developed Deep Vein Thrombosis (DVT) in the leg. He was put on necessary medications with lower limb elevation, active knee and finger movements, and constant wear of a DVT stocking.

DESUN’S SCIENTIFIC & PROTOCOL BASED TREATMENT FINALLY LEADS TO RECOVERY OF SUCH RAREST TRAUMA :

Chest and limb physiotherapy was done on regularly to aid healing and postural care was given to prevent pressure ulcers.

Finally, after 8 weeks of hospitalization he was fit for discharge to continue in the comfort of his home.

The huge experience of the DESUN’s specialized team not only saved Avijit’s life but also prevented functionality. Such rarest & critical trauma was only recovered because of the Equal effort from multidisciplinary approach & expertise critical care team’s 24 hrs close monitoring & scientific intervention.