Desun Today : September 2017 - In every Festive Season DESUN will be there 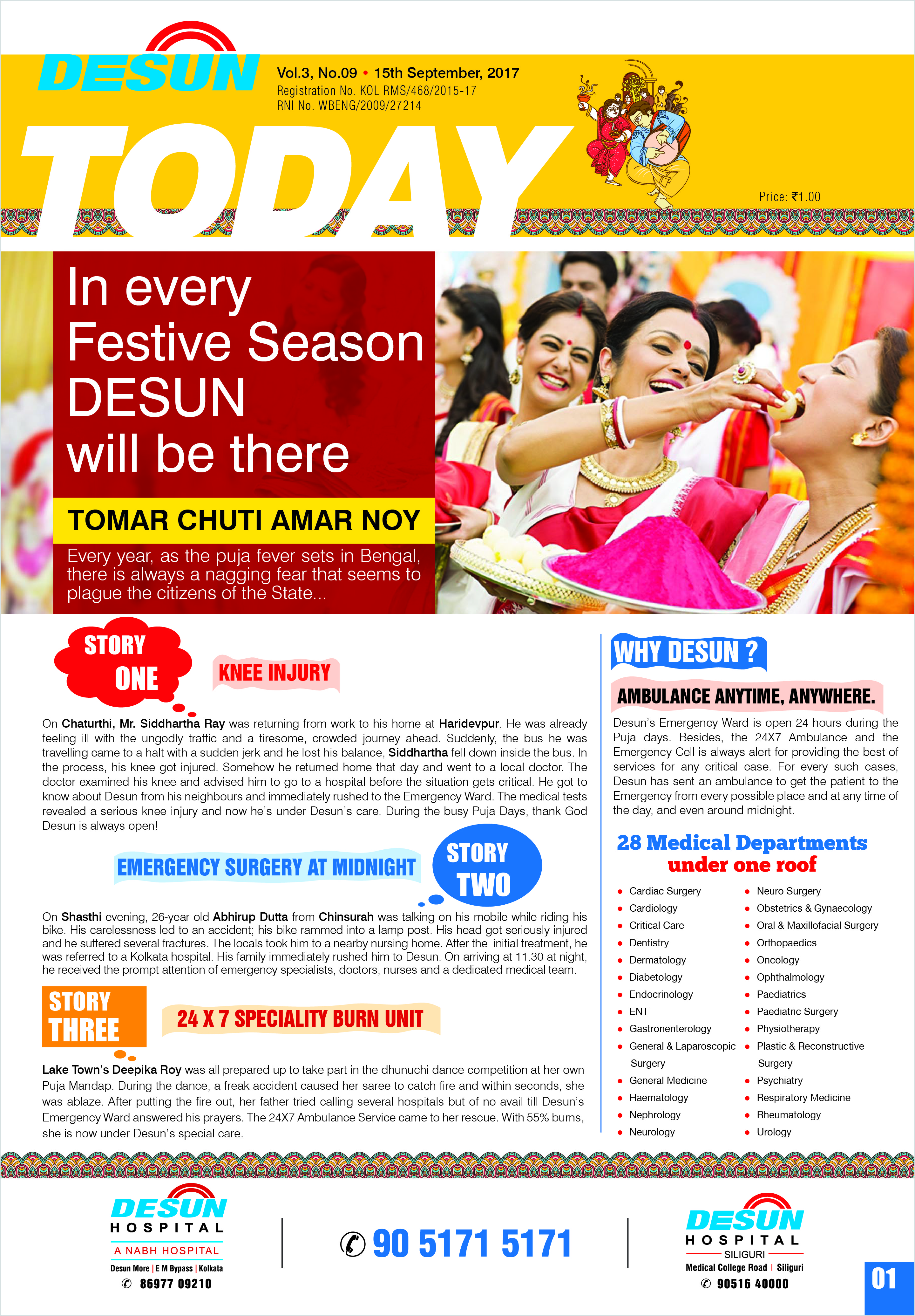 Every year, as the puja fever sets in Bengal, there is always a nagging fear that seems to plague the citizens of the State...

On Chaturthi, Mr. Siddhartha Ray was returning from work to his home at Haridevpur. He was already feeling ill with the ungodly traffic and a tiresome, crowded journey ahead. Suddenly, the bus he was travelling came to a halt with a sudden jerk and he lost his balance, Siddhartha fell down inside the bus. In the process, his knee got injured. Somehow he returned home that day and went to a local doctor. The doctor examined his knee and advised him to go to a hospital before the situation gets critical. He got to know about Desun from his neighbours and immediately rushed to the Emergency Ward. The medical tests revealed a serious knee injury and now he’s under Desun’s care. During the busy Puja Days, thank God Desun is always open!

On Shasthi evening, 26-year old Abhirup Dutta from Chinsurah was talking on his mobile while riding his bike. His carelessness led to an accident; his bike rammed into a lamp post. His head got seriously injured and he suffered several fractures. The locals took him to a nearby nursing home. After the initial treatment, he was referred to a Kolkata hospital. His family immediately rushed him to Desun. On arriving at 11.30 at night, he received the prompt attention of emergency specialists, doctors, nurses and a dedicated medical team.

Lake Town’s Deepika Roy was all prepared up to take part in the dhunuchi dance competition at her own Puja Mandap. During the dance, a freak accident caused her saree to catch fire and within seconds, she was ablaze. After putting the fire out, her father tried calling several hospitals but of no avail till Desun’s Emergency Ward answered his prayers. The 24X7 Ambulance Service came to her rescue. With 55% burns, she is now under Desun’s special care.

Desun’s Emergency Ward is open 24 hours during the Puja days. Besides, the 24X7 Ambulance and the Emergency Cell is always alert for providing the best of services for any critical case. For every such cases, Desun has sent an ambulance to get the patient to the Emergency from every possible place and at any time of the day, and even around midnight.

28 Medical Departments under one roof